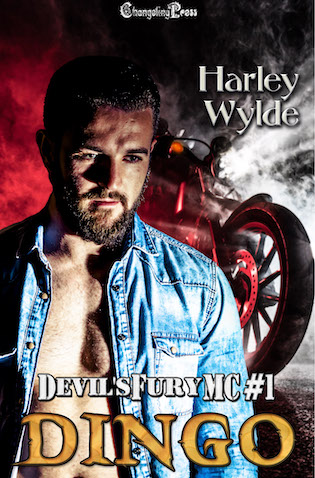 Meiling – All I’ve ever known was pain. My life has been far from a fairytale. No parents. No friends. Just an endless nightmare that I can’t wake from. Until the day a man offered me his hand and promised to keep me safe. I’ve never trusted anyone before, but there’s something about him. Maybe it’s insane, but I know he won’t hurt me, and when he puts his arms around me, for the first time in my life I feel loved.

Dingo – I’ve always had a soft spot for women and kids in trouble. One look at Meiling, and I knew I had to protect her at any cost. The beautiful girl with the wounded soul. After all she’s suffered, all I want is to make her smile, make her feel secure, and give her a chance to find happiness. But first, I need to take out the men and women responsible for hurting her. It might get ugly, and messy, but they don’t call me Dingo for nothing. I’m a crazy bastard and I won’t stop until she’s safe. I just didn’t count on falling for her along the way.

Warning: Meiling’s past isn’t pretty. Dingo and Meiling’s story deals with issues of human trafficking, bureaucratic corruption, and vigilante justice. This book contains darker themes that may trigger some readers.

“Sit right here, sugar. I’ll get Beau to make you something to eat.”

Once I made sure she would stay put, and the others would remain at their table, I went to the bar and spoke to Beau. He kept watching Mei, concern for her evident by the haunted look in his eyes and his jerky motions. It was like he wanted to go to her, but wasn’t sure how she’d take it. I’d never seen him like this before, and I wondered if there was something more between them. My stomach churned at the thought, which was ridiculous. I’d only laid eyes on her today. It wasn’t like she was mine.

“She’s important to you,” I said, hoping he’d offer up more information. All I knew was that he’d known Mei when he was younger. He hadn’t given us much more when he’d asked the club for help getting her away from the Ruby Slipper.

“Mei’s a part of my past, but I never should have left her. Maybe if I’d found a way to go back for her, then she wouldn’t have ended up…” He clamped his mouth shut, but I heard the unspoken words just the same. She wouldn’t have become a prostitute.

“Beau, you can’t blame yourself. When you came here, you were just a kid. Hell, you’re still a kid. If you’d gone after her, who’s to say you wouldn’t be the one whoring yourself out?” I said what I thought he needed to hear, but it made me wonder if he was right. Had Mei ended up where she did because he’d left her behind? What exactly had he been running from?

He winced and looked away, but it made me wonder about his life before he found the club. Or rather, before Grizzly found him. The old man did have a habit of bringing home strays. It’s how he’d ended up with his daughters, and I had no doubt that when he ran across another kid who needed help, he’d bring them home too. It was just his way. It was part of what pissed me off so much about how they’d handled Mei when she’d arrived today, and why I’d intervened when I did. I still didn’t know what the fuck was going on. I’d have never thought Demon or Grizzly would be like that with a woman in need.

“She needs food and clothes,” I said. “You handle the food, and I’ll send someone after some clothing for her.”

“I don’t think she has money for that kind of thing.”

I narrowed my gaze at him. As if I’d expected her to pay? It was obvious she’d been struggling, and had taken a trip through hell along the way. I wasn’t a big enough asshole to make her pay for stuff she hadn’t even asked for, and the fact Beau thought that made me want to put my fist through his face, but I refrained — for Mei’s sake. I still didn’t know how close the two of them had been, and I didn’t want to upset her.

He dropped his gaze and gave a nod before heading into the kitchen. I motioned over another Prospect and reached for a piece of paper and pen from behind the bar. I scribbled Mei’s sizes and made a few notes of specifically what I wanted him to purchase, then pulled out a wad of cash from my wallet.

“Henry, I want you to take this and buy what’s on the list. Not a damn thing that isn’t on there, understood?” I asked, handing him the money and paper.

“Got it, Dingo.” He shifted from foot to foot. “Where do I take it once I get back?”

I looked over at Mei and then the officers at the table. The way Demon watched her had me clenching my teeth. No fucking way I was letting her out of my sight. Well, not unless they ordered me to hand her over, and even then, I wasn’t sure I’d be able to. She was young and defenseless. Some caveman piece of me demanded that I beat my chest and warn the others off, let them know she was mine. Except she wasn’t.

Harley is the international bestselling author of the Dixie Reapers and Devil’s Boneyard series.

When Harley is writing, her motto is the hotter the better. Off the charts sex, commanding men, and the women who can’t deny them. If you want men who talk dirty, are sexy as hell, and take what they want, then you’ve come to the right place.

Check out Harley’s other books, and read some random facts about the author, at harleywylde.com.