He just wanted to give the struggling single mom a hand up.
He never thought he’d fall for her.

Clarity – I’ve been on my own since I was sixteen, and I’ve fought tooth and nail to make a life for myself and the son I never planned to have. Caleb is my entire world, despite the circumstances of his birth. Being homeless a second time certainly hadn’t been in my life plans, so when a gruff yet sexy biker offers a bit of help, how can I possibly say no? Doesn’t hurt that the older man is easy on the eyes, and he’s so good with Caleb. I’d thought I wasn’t able to trust anyone ever again, but looking into his eyes, I know deep down he’d never hurt us. It just never occurred to me that I’d fall completely in love with him.

Scratch – The young woman and kid I find sleeping outside of my club’s chop shop make me feel things I shouldn’t. Hell, she’s younger than my damn daughter, but it’s obvious she’s been to hell and back, and she’s still fighting. There’s fire in her soul, but the gentle way she treats her son leaves me wanting things I shouldn’t. Like a new chance at a family. What the hell would she want with a man thirty years older than her? When I took her home with me, I never counted on wanting to keep her. I’ll slay her demons, bury the monsters from her past, and then I’ll do the one thing I thought I’d never do… claim an old lady, then make her my wife. 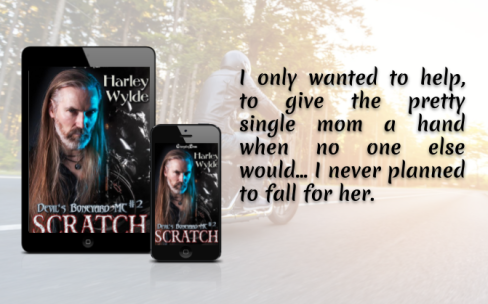 An auto repair shop was just a few more steps away, with a large enough doorway that Caleb and I could hide in the shadows and get some sleep. I checked the hours on the window and saw it wouldn’t be open for at least five more hours, which meant I could rest a little. I’d learned to sleep lightly, so that I’d wake up at the first sign of trouble, or whenever Caleb stirred. I was always scared I’d sleep so hard that he’d wander off and I’d never see him again. Hunkering down into the corner of the doorway, I settled Caleb on my lap and used my backpack as a pillow. My son snuggled against me and closed his eyes.

I didn’t think I’d been asleep for more than an hour when I heard a loud rumble. My eyes opened as a single headlight focused on us, making it hard for me to see. I held a hand up to my face, and shielded Caleb with the other. The light stayed on, but I could barely make out a shadowy figure dismounting from what I’d figured out was a motorcycle. The man approached and loomed over us.

“This is private property,” he said, his voice deep and raspy.

I could feel his gaze raking over me. I managed to get to my feet without stumbling, got my backpack straps over my shoulders, then hefted Caleb into my arms.

“Where are you going to go?” he asked.

“Doesn’t matter. I’m sorry we trespassed,” I said. I hitched my backpack a little higher over my shoulder and clutched Caleb to me. I tried to step around the large man, but he reached out and placed a hand on my shoulder.

I froze under that touch, tensing and waiting to see what would happen. Is this where he offered me a place to sleep in exchange for the use of my body? Wouldn’t be the first time I’d had that offer made to me, and I doubted it would be the last. I would do anything for my baby to have a place to rest and food to eat, or nearly anything. We’d struggled and things were bad, but I didn’t think I could handle having strange men touch me. Not after Caleb’s dad, or more like sperm donor. I didn’t think he would come after Caleb, even if he knew my baby existed, but I’d decided not to take any chances. Thankfully, I hadn’t seen him since we’d left. For all I knew, he wasn’t even in town anymore.

“Christ, you don’t even look old enough to have a kid,” he muttered.

My chin raised a notch. “I’m nineteen. Well, almost nineteen. Not that it’s any business of yours.”

I saw a flash of white teeth as he smiled in the darkness. “All grown up then, aren’t you? Eighteen, nearly nineteen, and think you know everything I bet. Why are you sleeping in the doorway of my business?”

I glanced behind me before facing him again. “I told you we didn’t mean to trespass.”

“That doesn’t answer my question.”

“We didn’t have anywhere else to go,” I admitted softly, my arms tightening around my son.

“There’s a lot of expensive equipment in there. Going to steal anything?” he asked.

I felt fire ignite inside me and I clenched my teeth a moment. I might be broke, but I wasn’t a thief!

“Come on.” He walked up to the doorway I’d just vacated, then he unlocked the front door and pushed it open.

I hesitated. I didn’t know if I could trust him, and figured my chances were better out here in the open than inside, but what if he was going to offer food for Caleb? Or maybe there was a couch in the waiting room and he’d let my baby rest there for an hour or two. It was an opportunity I couldn’t pass up, but at the first sign he was going to be a perv, I was out of there.

I stepped inside as he flipped on the lights, and I blinked at how bright they were. There was a beat-up leather couch with duct tape holding it together, and a scarred table with a few magazines on top. But the man didn’t stop in the front room. He kept going, so I followed at a slight distance. If I needed to run, I wanted a head start.

He entered a small, cluttered office and turned on a lamp. It glowed softly, the light dim, but there was a huge couch on one wall that looked a little too inviting with its overstuffed arms. It was leather, but unlike the one out front, it didn’t have so much as a scratch on it that I could see. The man pulled a blanket off the back and motioned toward the couch.

“You can rest here a while. I can either lock you in and reset the alarm, or I can stay until you’ve had a chance to rest. I’ll leave it up to you. But know that if you steal so much as one thing, I will track you down,” the man said.

Harley’s other half would probably say those words describe her, but they also describe her books. When Harley is writing, her motto is the hotter the better. Off the charts sex, commanding men, and the women who can’t deny them. If you want men who talk dirty, are sexy as hell, and take what they want, then you’ve come to the right place.