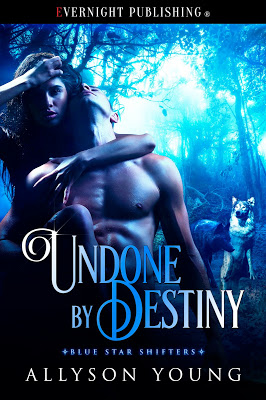 Blurb:
Desiree lost her heart to Tahl before he moved away, pursuing a redheaded shifter.
Devastated, she somehow managed to hope he got what he needed. Except, being part Fae, she now believes she’s cursed him. Tahl has returned, unmated, refusing to share what transpired.
When Tahl pursues her, realizing what she has always meant to him, Desi desperately
avoids, her guilt—and refusal to be second choice—a deterrent to her heart. Her twenty-fifth birthday approaches, and hot from the chase, Tahl corners her. He triggers her heat and she must allow him to assuage it, however outraged and resentful she might be.
The redhead follows Tahl, refusing to accept his mating—he can’t be bonded should his mate die… The males fail to thwart the nefarious plan, and the true nature of both females is revealed. Only one bitch can win and keep Tahl’s heart, and Desi won’t lose.

Excerpt:
Now that he was here, he was stalling, and he grimaced. Nothing much scared him, but the female presumably inside the cabin… He forced his feet to carry up the short set of stairs and opened the front door with a confidence he didn’t feel. Until he saw her.
Huddled on the couch, facing him, was his future mate, the most beautiful thing he’d ever seen—or scented. Cheeks flushed, hair now streaming in wild abandon and clothing awry, she glared at him, her rage muted by the trembling need radiating from her tense body.
“Baby. I got here as soon as I could. I—” His attempt at an apology was overridden as Desi lurched to her feet.
“It’s not fucking fair that I have no recourse in this, Tahl. It’s a done deal because you decided. You. And now I’m stuck with you. I have to submit to your … physical attentions so I can function.” She laughed, a harsh mimicry of her usual, musical burst of sound.
The one he hadn’t heard in his vicinity for a very long time but had never forgotten. The dichotomy scalded his senses. She stood, her body shaking, the hormonal flux pouring off of her, and he balled his fists to keep his hands to himself. A vastly angry Desiree was an incredibly beautiful and appealing female and his wolf seethed with impatience against her siren call. Tahl shoved his animal back and cudgeled his brain for something that would soothe her. Some sense of self-preservation kept him from offering his heart. It was quite likely she’d carve it out of his chest and eat it with a spoon.
His breath stuttered as with awkward, jerky movements, she yanked at the front of her silky shirt, the fine fabric rending beneath her impatient hands. She threw the remnants in the general direction of the couch before working at the zipper on her little skirt. The garment slid over her thighs to pool around her ankles, his avid stare tracking it as the black lace of her matching panties was revealed as well as the long length of her legs. She stepped out, nearly losing her balance, and kicked the material away. This was so not how he imagined it. Throat dry, he closed the distance.
“Desiree. Easy, baby. Let me—”
“You’ve done enough, Tahl,” she coughed out between shuddering
breaths. “Now do what nature intended.”
Her pretty bra popped open and her breasts were displayed. Sitting high on her narrow torso, they were in perfect proportion to the rest of her, though visibly swollen with need, the dark nipples beaded tightly.
Everything in him screamed to take her right fucking now, his cock so hard it hurt, his wolf groveling. Groveling. With inner strength he somehow drew from somewhere, perhaps his conscience, maybe his aching heart, he wrestled his libido into submission and hugged her instead. Trying to offer her comfort. His eyes closed against the intense draw of her soft, silky skin, the heat of her radiating intensely to the very marrow
of his bones.
Desiree wrestled free, wild-eyed and flushed. Surely no other male would have been so fucking stupid as to trigger his future mate’s heat on the side of a goddamn highway and then leave her unfulfilled? He cursed himself again.
She scrabbled at the fine stuff of her underwear and it met the same fate as her shirt. Tahl drank in his first sight of the female who was his, all creamy skin and smooth curves, the soft dark hair at her apex neatly trimmed. But she was shaking harder, out of control, the scent of her arousal overwhelming him, and instinct took over.
With economic movements, he stripped off his own clothing. Desiree swayed, her eyes tightly shut as she panted through the tiny whimpers falling from her lips. He spoke her name even as he gathered her up and bore her down on the wide, soft couch, but she wouldn’t—or couldn’t—open her eyes.
There was no time, or need, or foreplay. He’d left her too long. Testing her preparedness with one finger, he grunted his satisfaction. Soaked. Her thighs opened wide for him as he maneuvered between them, her arms splayed and her head thrown back. She writhed, her wolf clearly right at the surface, and her whimpers escalated both in volume and quantity.
Recognizing the time for fucking couldn’t be put off by conversation, however necessary, he fit the weeping crown of his cock against her opening. Wet, sultry heat engulfed him as he surged inside on a desperate thrust. And froze at her muffled yelp.
“Fuck me, baby. Fuck. Me.” He wrapped her up, working his arms beneath her shoulders to tuck her as tightly against him as he could manage while holding his cock steady, giving her time to adjust. It was his turn to screw his own eyes shut in order to concentrate on not moving one fucking iota.
He’d just taken her virginity, and even his wolf paused in its desperation to claim her.

Allyson Young lives in cottage country in
Manitoba, Canada with her husband and numerous pets. She worked in the human
services all across Canada
and has seen the best and worst of what people bring to the table. Allyson has
written for years, mostly short stories and poetry, published in small
newspapers and the like, although her work appeared in her high school
yearbooks too! After reading an erotic romance, quite by accident, she decided
to try her hand at penning erotica.
Allyson will write until whatever she has
inside her is satisfied- when all the heroes man up and all the heroines get
what they deserve. Love isn’t always sweet, and Allyson favours the darker side
of romance.
http://www.allysonyoung.com
allysonyoung45@gmail.com
Links:
http://www.amazon.com/Allyson-Young/e/B00A9WPAYK
http://www.evernightpublishing.com/allyson-young/
http://www.barnesandnoble.com/s/%22Allyson%20Young%22?Ntk=P_key_Contributor_List&Ns=P_Sales_Rank&Ntx=mode+matchall
http://www.bookstrand.com/allyson-young
https://play.google.com/store/books/author?id=Allyson+Young
https://store.kobobooks.com/en-us/search?query=Allyson%20Young&fcsearchfield=Author
https://www.smashwords.com/profile/view/allysonyoung1 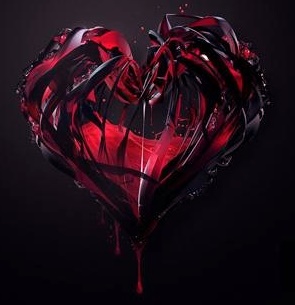 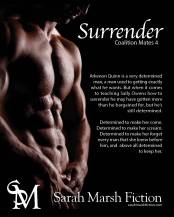 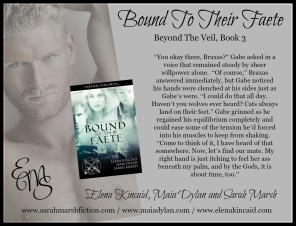 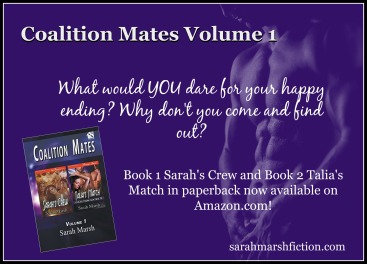 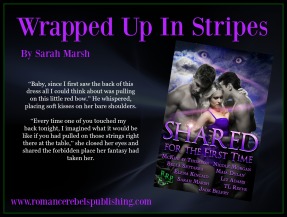